Interesting, Lady Gaga who's real name is Stefani Joanne Angelina Germanotta, chose her name after the Queen song, Radio Gaga, but it is interesting that her name is similar to the wife of Salvador Dali. Dali was married to Gala, a self proclaimed fashion designer. Here is an example of "Gala's" fashion, notice how similar it is to Lady Gaga: 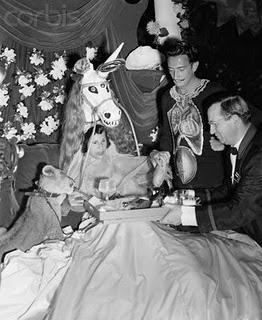 Gala with her Unicorn headdress 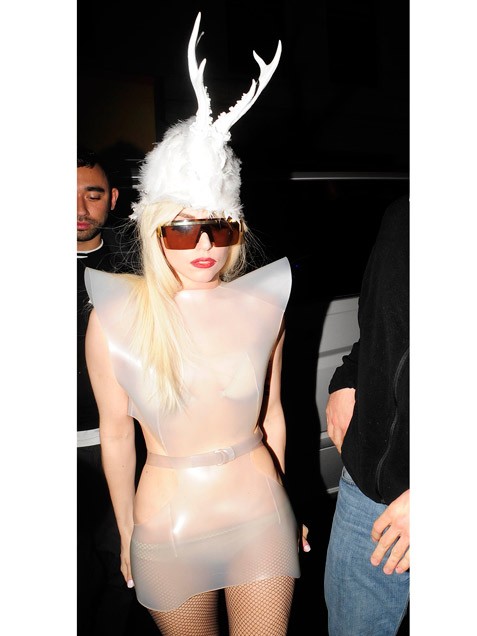 Lady Gaga with her Antler Headdress
Notice some of the head gear or fashion Lady Gaga wears in public and on stage, it is very similar to hats and fashion created by Gala, Dali's wife. In addition to the similarities between Gala and Lady Gaga, the use of a piano with legs fashioned after the stork legged elephants in many of Dali's works like the famous "Temptation of St. Anthony" seen here 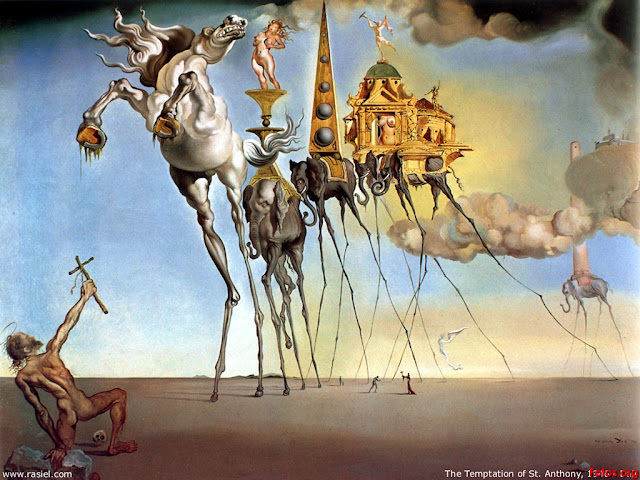 Here is Lady Gaga's use of the long skeleton legs we see on the elephants and horses in the image: 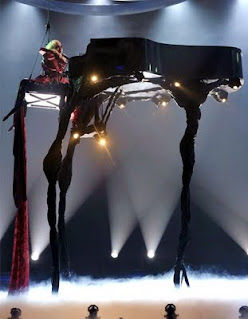 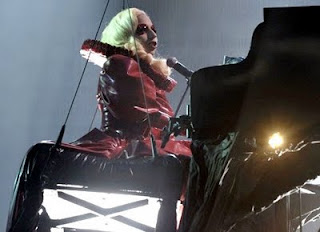 and then the recent image of her wearing a telephone on her head, and the famous meat jacket make it clear that she is inspired by and pays homage to the last master of the 20th Century, Salvador Dali.
The meat or flesh dress she wore to an awards show was taken from another designers idea from the 1980s, but look at all the similarities between Gaga's designs and Dali's. Dali and Elsa Schiaparelli created many of the ideas Lady Gaga has been using for the past few years.

Lady Gaga's Telephone Hat and some examples of Dali and Elsa Schiaparelli designs. 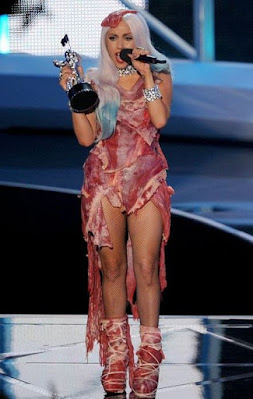 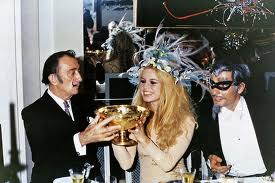 Dali and Brigitte Bardot back in the 1960's, notice the Hat, almost looks like something
we might see on Lady Gaga?

Before her music career took off, Lady Gaga went to art school in NY.

This could be the place she saw works by Dali and his wife Gala and was inspired to
borrow the ideas for her own use. While some say the Queen song Radio Gaga is the
originof her name, It seems the name Gaga was an interpretation of
Salvador Dali's wife's name Gala.

In addition, Dali used to like to show up in public wearing a
full diving outfit with heavy bell helmet, or perhaps take a walk with an
anteater or some other unusual animal on a leash. The public was
shocked of course and the events wound up in the news back
in the 1960's and 70's.  Another similarity is the "vessel" Gaga emerged from
at the Music Awards, Dali and his wife Gala broke out of a giant egg (same shape
as the vessel) on the beach in Spain and poured red paint on the shore while talking
about the rebirth of surrealism, thus the egg.

Lady Gaga seems to have latched on to the idea and attempts to
shock the public at any opportunity.
It would be nice if she would give credit where credit is due and mention
Dali's name every now and again.

Your comments are welcome!

*Update: Since the posting of this blog, Lady Gaga has mentioned Dali
and his wife Gala on various tv and radio shows ranging from
Jay Leno to Ryan Seacrest. Salvador Dali himself also borrowed from other
artists, but he always gave them credit. :)
Check out our Art Podcast and if you are interested in being on the show to discuss anything
art, let us know by messaging us on this platform CLICK HERE.
artworkpodcast.com
Posted by Art Person at 4:05 PM

"Those who do not want to imitate anything, produce nothing" - Salvador Dali

I agree, I simply wanted her to give Dali credit. Dali titled many of his works with the word "Homage" letting the viewer know the origin of the idea for the work. After I posted a comment about this on Lady Gaga's FB page, she talked about the subject the next day on Jay Leno and Ryan Seacrest shows.